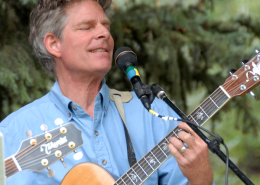 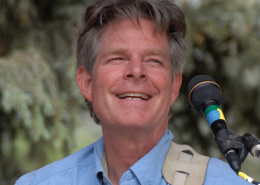 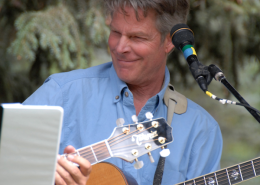 Larry Good won the Telluride Bluegrass Festival songwriting contest, performing on the festival’s main stage two years in a row. Still, he’s not really a bluegrass guy. He has opened for artists like John Prine, Jimmy Cliff, Little Feat, David Wilcox, John Hiatt, Warren Zevon and Steel Pulse, but he is not a folkie, or a reggae man. He earned a BA in musical composition from Stanford University, and although he produces orchestral film scores he’s not really a classical guy either. He doesn’t characterize himself as either a guitarist or a pianist, though he plays both professionally. Larry just never could make up his mind, wouldn’t commit!

As you may hear in the wide stylistic range in his albums and film score work, Larry is an homage guy, casting the music to best serve the song, or the scene, or the characters.  This leads him into some interesting and obscure territories. Retro-cool space-age bachelor-pad lounge music, anyone?

In the winter of 2009 Larry had the the opportunity to spend time (and money) in Great Divide Studios where he recorded the basic tracks for three new albums. This musical carpet-bombing approach allowed him to be all things at once – hints of Les McCann on the instrumental Five Points, Les Baxter on Cheeze Party (“Les is more“), raw blues in the intimate Blue Flame, the Floydian Falling Out, truck-stop wisdom in the country-to-the-bone Buffalo Nickels, Broken Down Cars and Cowboys Don’t Cry. The three albums available here are so different from each other, it is hard to imagine they came from one artist,  but you might like them all!

“Hey, Marvin!” That’s how this album begins. Bassist Doug Whitney calling in the spirits of soul with the extremely funky bass opening to Made of Money. This draws in a horn section (Bryan Savage, Scott Benner,) to a tongue-in-cheek party romp in which price is no object.

Kryptonite could be a light-hearted treatise on the marital stand-off, (“Once you’ve had a one-legged woman, you can’t go back to two,”) but it’s not. It’s just a rock song. The Pony Dies contains an entire world in music. At one point the meter jumps from 7/8 to 11/8 to 15/8. Can you find it? Drummer Paul Valentine really shows his world-beat sensibilities.

Some people have thought I was seriously putting out a song about offing the effing whales, but Save the People is a farce. I am sorry for any misunderstanding. Speaking of misunderstanding: Little Misunderstood? Backwards hi-hats  and mellotron, Blue Jay Way homage, mariachi horns and a smart lyric about self-victimization (“…such a pretty Helen Keller, waving her arms, yelling in Braille, just to see, if she screams, who will help?”) I should write a book! Come on, people – check it out!!

This is the album to get if you are looking for the musical folktales, the hard-hitting songs in their work clothes. The title song is an Alt-country rave-up celebrating the lottery mentality that sucks up our rare coin and pays us back in pizza and beer. Story-songs take the listener into the obscure lives of a dignified people (Cowboys Don’t Cry), a transatlantic love affair (Johnny’s Wife), a cultural heritage spelled out in a lineup of junked vehicles (Broken Down Cars) a poignant trade of ambition for fleeting comfort (My Red Guitar.)

These tunes are folk and country; raw (Blue Flame), and cooked (If Not For You); solo and produced. These are the songs that make you go: “Now that’s a great song!”

Ted’s Divorce is my retro-cool space-age bachelor-pad lounge opera set in 1960. It is the musical story of a man named Ted, who suddenly found himself, well, y’know…divorced.

Ted was surprisingly happy all alone in his modern bachelor pad with his motorized recliner, his striped trousers and his red blender. He loved television, his records, and his Lowrie Genie organ. He enjoyed lighting his tiki torches, spending time with his hip new friends, lounging on his rattan yard furniture and staging the occasional Cheeze Party. Plus, there was his housekeeper Carmen (Carmen, Get the Door; Por Favor.) to keep him real. But alas, soon Ted would be left behind, not just by his wife, but by an entire generation.

The tracks available here are the first of this project to be completed, with more to come. The album-in-progress is available here at a low, low price ($5.99). This is music like you have heard before – by accident! So come on! This is fun stuff!

You can hear the shadow of ‘Retro-Cool, Space-Age-Bachelor-Pad-Lounge’ Music on the Escape channel on Sirius XM satellite radio. If you are interested, read on and I will tell you a bit about the musical movement that never was.

IF NOT FOR YOU

About These Additional Tracks – Treehouse . . .

WANT A CD INSTEAD OF A DOWNLOAD? Albums are also available in hard copy CD format, including original jacket artwork. Please fill out the form below to receive ordering instructions.

Dog Deuteronomy isn’t exactly music, although music is involved. This piece could be described as an audio experience for your dog, and a comic experience for you. Put this track on infinite repeat and crank it up when you leave the house. When you return, your dog will be trained. Guaranteed or your money back!